Located in Karnataka´s Kodagu and Mysore districts, the Nagarhole Tiger Reserve is part of the Nilgiri Biosphere Reserve.

Examples of animal species that live in the park are the Bengal tiger, Asian elephant, Indian leopard, and Indian bison.

The park has a thriving forest, and undulating topography with hills and valleys bisected by small streams.

Previously, the protected area was known as the Rajiv Gandhi (Nagarhole) National Park. It was declared the 37th Tiger Reserve of India in 1999. In the past, the area was a hunting reserve for the members of the Wodeyar dynasty, which ruled the Kingdom of Mysore from 1399 to 1950 (except for a brief interruption in the 1700s).

The name Nagarhole comes from “naga” which means snake and “hole” which refers to the streams. 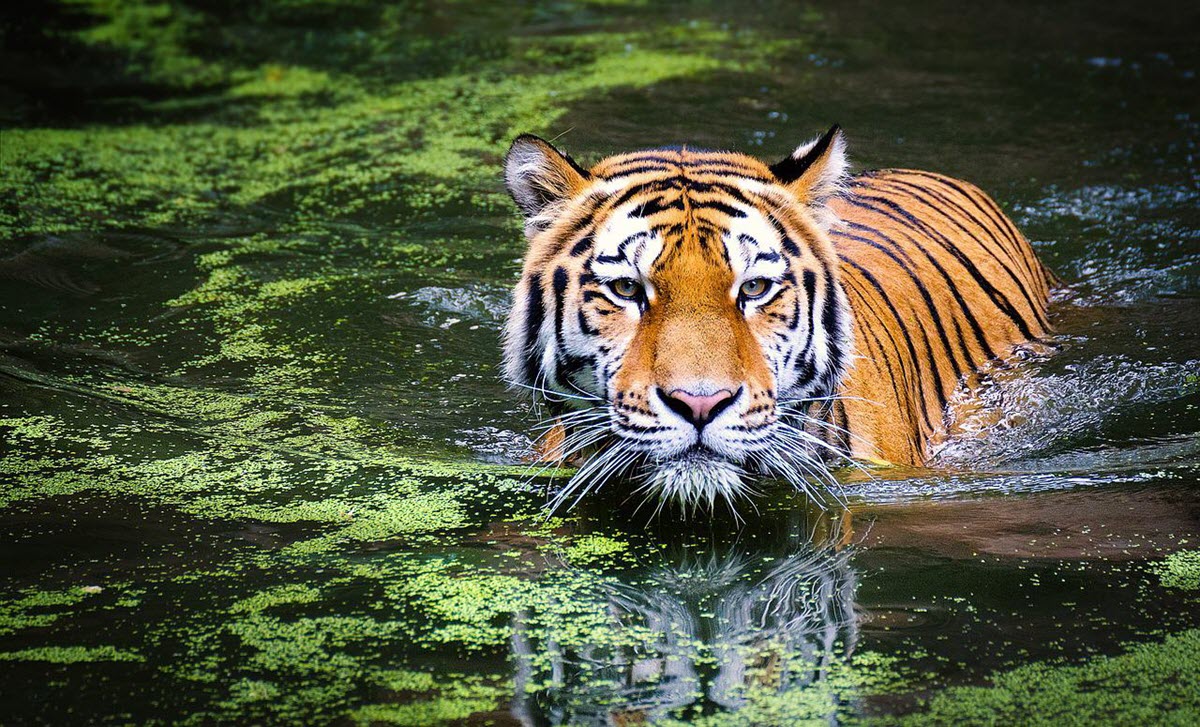 How large is the reserve?

The Nagarhole Tiger Reserve is 50 km from Mysore.

The Nagarhole Tiger Reserve includes part of the foothills of the Western Ghats. The lowest part of the reserve is 687 metres above sea level, while the highest point is at an altitude of 960 metres.

The average annual rainfall is 1,400 mm.

Examples of important water sources are the Lakshmmantirtha River, Sarati Hole, Nagar Hole, Balle Halla, and Kabini River. Many of the streams in the reserve are only seasonal, but there are four perennial streams and four small perennial lakes here, plus man-made structures such as the Taraka Dam and the Kabini Reservoir. Over 40 artificial tanks have been placed in the reserve.

The moist decidous forest characteristic of North Western Ghat dominates in the reserve, but not everywhere. The souther parts have a lot of teak and rosewood, while the easternmost areas have more pala indigo and thorny wattle; two species strongly associated with the Central Deccan Plateau´s decidous forest. The sub-montane valley swamp forest habitat is also represented.

Examples of mammal carnivores in this reserve:

The Nagarhole Tiger Reserve is home to Indian elephants (Elephas maximus indicus). This is one of three extant recognised subspecies of the Asian elephant.

Over 270 species of bird have been identified in the reserve, and the location is recognized as an Important Bird Area by BirdLife International. It is one of the few places where the Oriental

white-backed vulture still exists in the wild. (This species is listed as Critically Endangered by the IUCN Red List.)

The Bengal monitor is a large lizard that mainly lives on the ground, but it can climb trees and young specimens are quite arboreal. It can grow up to 175 cm in lenght.

Elephants living in the reserve sometimes leave to eat crops grown by nearby villagers. In 2001, the Karnataka state government paid for the creation of elephant-proof trenches and installed solar fencing around the park to safeguard the farmers´s fields.